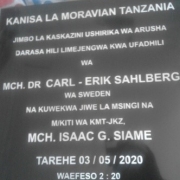 We receive messages from Mokicco from Carl-Erik and place them here to keep you informed of their developments.

Here in Tanzania we, as the whole world, is living with corona. I must say – even if you perhaps disagree with me – that I think that all the restrictions around corona are so exaggerated. We are not allowed to shake hands, we must stand some meters away from each other, we must have, what they call, “barakoa” on our mouths a.s.o.
And the church seems to feel proud and cautious and close Sunday school classes and in some churches you have to sit away from each other a.s.o. I believe corona is a sickness – but I do not believe that all people who are said to die from corona have died from corona. We can die of other reasons.

Here in Tanzania president Magufuli has gone out officially to blame churches for being so afraid. He told the bishops and the priests to believe in God and give people faith. He has also said – which I also wrote in an article to a magazine in Sweden – that fear for corona is more dangerous than corona itself. There is a story about a plague which was said to have killed 10.000 people. Someone asked the plague: “Did you kill 10.000 people?” “No”, the plague answered, “I did not kill anyone but the fear for me killed 10.000”.
To wear “barakoa”, not to shake hands give people fear. Yesterday I also heard from official authorities here in Tanzania that they suggested that people have to live with that sickness as we have to live with other sicknesses and not behave as we have done with corona. People start to wake up and get sober!

What to mention especially from the last weeks? Perhaps two things. Sunday May 3rd we were invited to the Moravian Church in Arusha again. They wanted to thank us and MOKICCO for our help to build a kindergarten in a mission area in the Masai land south of Arusha. The Moravian congregation was so thankful and had also made a sign to be put on the new building. (picture).
Another special event was that MOKICCO sent its first evangelist to a mission area in Geita at Lake Victoria. His name is Pascal and his history is also special. His parents divorced and both of them remarried. Pascal was not welcome in any of the new families – and the father had locked the house where Pascal temporally lived. He came to us, from the beginning almost hiding here, but we started to know him better and appreciate him.
An Anglican Church in Geita needed an evangelist in a mission area and Sunday 10 we prayed for Pascal and sent him. Let us follow him with our prayers – and let´s continue to thank God for and pray God for MOKICCO!